Learn about these two wireless chargers

The charging interface is located on the back of the wireless charger and uses the Micro-B interface.

The following picture is what it looks like when the charging cable is connected to the back. It has a non-slip design around the support frame and can be placed firmly on the table without worrying about the phone falling down.

The white bought in the regular version is better than putting it on the bedside table in the bedroom.

Belkin’s product line has been doing very well. From the picture below, you can see that there is a non-slip silicone pad on the outermost front of the wireless charger, which can ensure that the mobile phone will not move when vibrated or accidentally touched while charging.

In addition to the middle parameters on the back, there are also four curved non-slip rubber pads on the outer ring. In addition, it can be seen from the parameters that the wireless charger supports a maximum of 5W wireless charging when the input power is 10W.

After looking at the appearance, let’s look at the accessories. In fact, the accessories of the two wireless chargers are the same, but the colors are different.

Both wireless charger accessories have a manual, an adapter plug and an A2B charging cable.

The adapter looks pretty, it doesn’t give me a cheap feeling, the matte plastic material feels more comfortable, and the maximum power of the adapter is 18W. 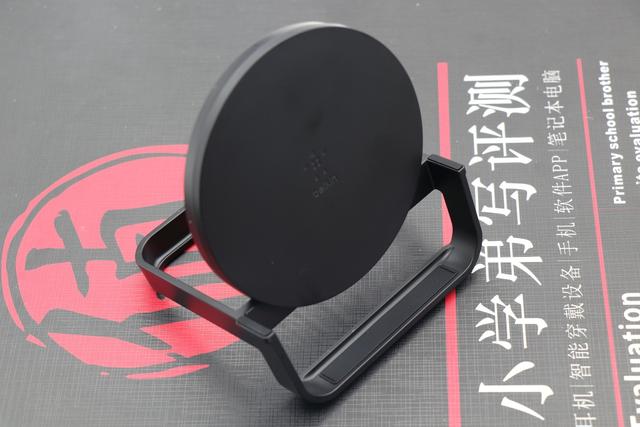 The quality of the charging cable is great, the details and workmanship are first-class, but the Micro-B interface makes me very uncomfortable.

It takes 3 hours and 50 minutes for the actual phone to fully charge the iPhone 11 Pro Max with no power. It is slower than the original PD fast charging head and much faster than the 5v1a adapter.

Belkin’s vertical wireless charger can be used horizontally and vertically, and can meet your different needs. For example, you can unlock Face ID when it is placed, and you can change the video while chatting with family and friends.

While horizontally, you can play games (that is, the posture is a little tired), you can brush the drama to watch movies, in short, there are many different experiences, and you can come according to your different needs.

This white wireless charger cannot be charged vertically or horizontally, but it can directly charge Airpods that support wireless charging, which is also very convenient to use. The price of these two chargers is the same, you can choose according to your needs and preferences.

Both of these wireless chargers are compatible with Qi charging. Samsung, who has no choice but to send it to his family, has sent it to his home. Otherwise, you can measure Qi’s charging power and speed. Both wireless chargers have a foreign object recognition function. The indicator light will turn yellow when a foreign object is recognized. The vertical wireless charger indicator is on the strong side and is not easy to see. Charging like a case (below 3mm, except for the metal case) is of course supported, otherwise it will be uncomfortable to remove the protective cover every time you charge. In addition, these two wireless chargers have a three-year warranty and are only repairable, which is indeed more conscience than the 1-year warranty of other brands.